History of the Church

Known in Scandinavia as the Laestadian Movement, this church started as a revival or awakening in the parish of Kaaresuvanto in the northernmost part of the State Church of Sweden. It received its name from the minister, Lars Levi Laestadius. The immigrants who brought this movement to America were of Laestadian Lutheran background in their home countries. At first they attended other Lutheran Synods in America, but they desired to organize a congregation of their own. In 1872, they organized a congregation “Salomon Korteniemi Lutheran Society” in Calumet, Michigan having called Salomon Korteniemi from Norway to be their minister. Other congregations followed under various names, primarily in Michigan, Minnesota, Oregon, and Washington. The name “Finnish Apostolic Lutheran Church of Calumet” was adopted in 1879 and this was the first use of “Apostolic Lutheran” in our name.

Apostolic Lutheranism, as a whole, has been and still is mostly a lay movement with ministerial training not a pre-requisite for ordination to the ministry. Evidence of a “call by God to preach the Word” is the main criteria for ordination of the clergy and elders. The church buildings in which members worship are very simple in structure and beauty. The worship service consists of a simple liturgy. A typical worship service includes an opening hymn, prayer, a hymn and free will offering, a sermon from the Bible, communion, and a closing hymn and benediction.

Each congregation in the Apostolic Lutheran Church is autonomous. The Apostolic Lutheran Federation presently has 43 ministers on the Ordained Ministerial Roll, 33 ministers on the Unordained Ministerial Roll. The Western Mission, the Eastern Mission and the Southern Mission coordinate domestic mission activities in the United States and Canada. The Foreign Mission sends missionaries to several other countries around the world. Other Federation activities include the National Sunday School, Book Concern, and a monthly publication of Christian writings called “The Christian Monthly”. 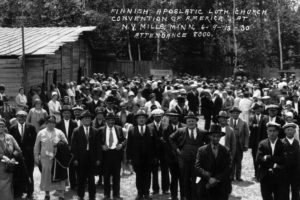 The Apostolic Lutheran Church of America recognizes as true: the Christian Doctrine, based on the Old and New Testaments of the Holy Bible; the Lutheran Doctrine, the Book of Concord, and the three ecumenical symbols: the Apostolic, the Nicene, the Athanasian Creeds, and the Augsburg Confessions; (those parts) which are in agreement with the Holy Bible and uphold the Confession of True Faith, and love as the greatest law.

All ritual and polity of the Church are to be governed according to the immovable truths of the above mentioned Confessions, namely, that the Holy Word of God (both the Old and New Testaments) shall be the sole authority of truth in the light of which all doctrine in this Church shall be examined and determined.

The principal calling (duty) of this Church shall be the propagation of the true doctrine, which shall manifest itself in the preaching of repentance and the remission (forgiveness) of sins, and by the administration of the sacraments of Holy Baptism and the Lord’s Supper customarily practiced by the Apostolic Lutheran Churches.